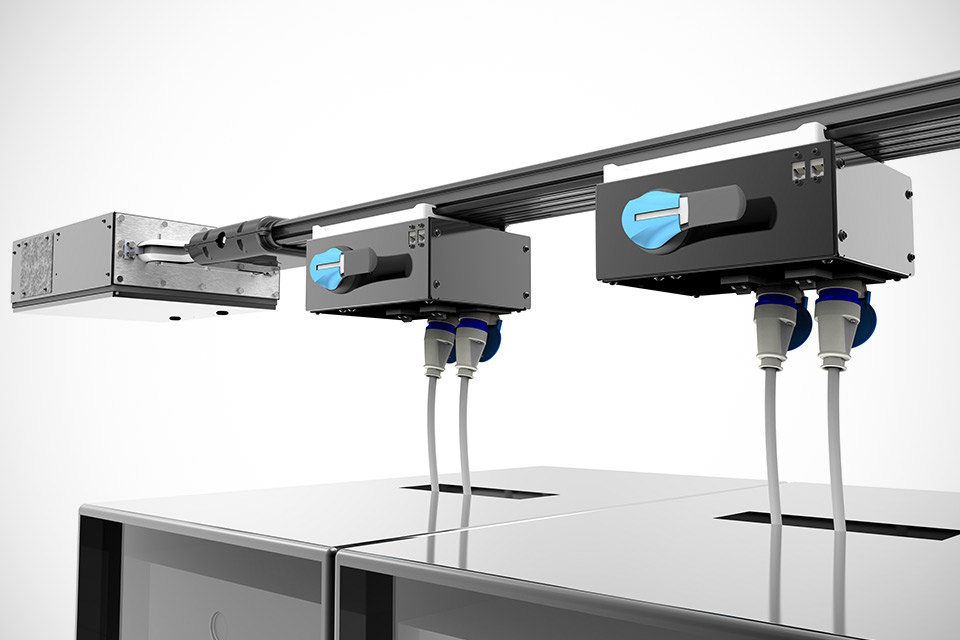 it is estimated that more than 30,000 arc flash incidents occur each year, resulting in an average of 7,000 burn injuries, 2,000 hospitalisations and 400 fatalities.Find out what safety features have been integrated into E+I Engineering's iMPB Product  to ensure users and installers are protected at all times.

The NFPA 70E, describe arc flash as “a dangerous condition associated with the possible release of energy caused by an electric arc.” An arc flash occurs when a surge of electrical current caused by a short circuit, flows through the air from one energised conductor to another. This results in a release of ‘incident energy’ which is expressed as an explosion of heat and pressure into the external environment. Despite the transient nature of arc flash incidents, they have the potential to reach temperatures of up to 35,000°F.

Arc Flash Risk in the Data Centre
As the demand for data increases, modern data centres are now seeking higher power capacities, higher rack densities and higher efficiency designs, all of which have an impact on arc flash risk. As power capacity and rack densities increase, all things being equal, so too does the available fault current. Ironically, the quest for higher efficiency designs can also increase the risk of arc flash in the data centre. Transformers represent one of the highest losses in electrical power distribution, however they also provide inductive and resistive impedance that limits fault current. To reduce losses, modern data centres are being designed with fewer, larger transformers compared to traditional data centres. However, as this also reduces electrical impedance within the power system, the trend of higher efficiency designs tends to increase the available fault current and the risk of arc flash. This can result in consequences such as lost work time, downtime, fines, medical costs, lost business, equipment damage; And most importantly arc flash presents a severe safety risk to human life.

Intelligent Medium Powerbar – Safety by Design
E+I Engineering’s iMPB open-channel busway solution has been manufactured with the safety of the installer and user as the number one priority. iMPB is the safest and most flexible open-channel busway system on the market due to a range of in-built features that greatly reduce the likelihood of arc flash in the data centre. These features are designed to ensure continuity of power in in a world that demands 24/7 uptime, whilst also making operator safety a priority. Arc flash testing according to IEC/TR 61641:2014 has been completed for E+I Engineering’s full iMPB range.

Protective Housing
iMPB lengths are designed as an open track system where tap off units can be plugged in anywhere along the bar.  The assembly is designed to exceed the minimum ‘finger safe’ requirements of both UL and IEC standard, this greatly reduces any risk of any accidental contact and hence reduces the risk of arc flash. The copper conductors are fully isolated from the housing using a certified thermoplastic material, the insulation has excellent dielectric strength and is impact resistant. The lengths are connected using custom designed thermally and electrically secure joint packs, that can easily be disassembled and reassembled.

iMPB offers an enhanced layer of safety by offering a closure strip that can be fitted over the area of the busbar that is not connected to a tap off unit. This increases the protection to IP3X, further reducing the risk of an arc flash.

Mechanical MCB Interlock
An MCB Safety Interlock can be integrated into E+I Engineering’s iMPB product to prevent the tap off unit being fitted to the bar while the MCB is in the ‘On’ position. Similarly, the tap off unit can only be removed from the busbar when the MCB is in the ‘Off’ position. The MCB can only be switched on when the contacts are fully engaged with the busbar. This provides users with an extra layer of safety when fitting/removing tap off boxes from the busbar.

The mechanical interlock secures the tap off box to the busbar using high tensile strength lockable hardware which cannot be fitted incorrectly. Once fitted to the bar, the engager handle can be turned. This lifts the contacts into the busbar and has a positive lock once fully rotated. This mechanical connection between the tap off unit and the busway prior to any electrical connection, ensure that there is no risk of an arc flash incident when installing iMPB tap off boxes to the busbar.

“Ground First, Break Last” Technology
PB tap off units are fitted to the busbar using E+I Engineering’s unique ‘earth first, break last’ safety feature. Each tap off unit interlocks onto the distribution length with a ground strip. This ensures that the ground is the first point of contact with the busbar system during installation, achieving a lower fault current and lower fault clearance time as excess current will always exit the busway system through the grounding strip.

Hook Operated Tap-Off Units
iMPB can be installed vertically or horizontally depending on project requirements. However, it is typically ceiling mounted above the rack. For safer operation, E+I Engineering have introduced a hook operated tap-off unit which can be switched on and off from the floor using a simple hook mechanism. This adds a further level of protection as users have no direct contact with the tap-off box while it is energised.

In mission critical environments, which is constantly demanding higher levels of power, the dangers of arc flashes can never be completely eliminated but they can be controlled. This is done by understanding where the potential hazards are and taking steps to mitigate them. In the open channel iMPB busbar product, E+I Engineering have implemented a range of safety features to minimise the risk of an arc-flash incident, preserving both operator safety and system efficiency.